Aliens Might Shoot Lasers at Black Holes to Travel the Galaxy 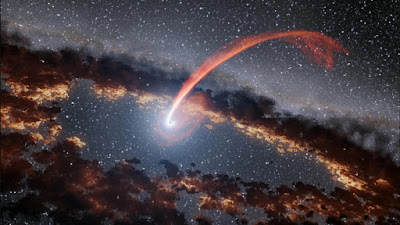 An astronomer at Columbia University has a new guess about how hypothetical alien civilizations might be invisibly navigating our galaxy: Firing lasers at binary black holes (twin black holes that orbit each other).
The idea is a futuristic upgrade of a technique NASA has used for decades.
Right now, spacecraft already navigate our solar system using gravity wells as slingshots. The spacecraft itself enters orbit around a planet, flings itself as close as possible to a planet or moon to pick up speed, and then uses that added energy to travel even faster toward its next destination. In doing so, it saps away a tiny fraction of the planet's momentum through space — though the effect is so minimal it's pretty much impossible to notice. [9 Strange, Scientific Reasons We Haven't Found Aliens Yet]