Quantum Computers: A Threat to Blockchain?

How Can a Quantum Computer Pose a Threat?

There are two main concepts behind the quantum computer: superposition and quantum entanglement.

The superposition allows a quantum bit (qbit) to be in several states at the same time, and with the help of quantum entanglement, the observer can find out the parameters of a particle in any position in the universe. The connection is preserved, even if they are moved into different parts of the Universe.

In essence, a quantum computer can process and analyze infinite bits of information at the same time — and so quickly and differently than the human mind cannot grasp it.

... In 1998, Daniel Loss, one of the authors of the current study, came up with a proposal, along with David DiVincenzo of IBM, to build a quantum computer by using the spins of electrons embedded in a quantum dot—a small particle that behaves like an atom, but that can be manipulated, so that they are sometimes called "artificial atoms." In the time since then, Loss and his team have endeavored to build practical devices.

... it is based on semiconductors, for which a large industry already exists. ...

... 90 percent of all data produced in human history was produced within the last two years.
... MIT partnered with Google to mathematically demonstrated the ways in which quantum computers, when paired with supervised machine learning, could achieve exponential increases in the speed of data categorization.

... governments are investing heavily in quantum computer systems research as are major tech titans like Google and IBM. These developments are expected to begin impacting the 5 areas of the economy we looked at within the next decade, and maybe as early as 2020.
No comments:

The microchip - which is 1.5cm wide, 5cm long and 0.5cm thick - has components inside that interact with light in different ways. These components are connected by tiny channels called waveguides that guide the light around the microchip, in a similar way that wires connect different parts of an electric circuit.

... "This experiment is the first to integrate three of the basic steps needed for an optical quantum computer, which are the generation of quantum states of light, their manipulation in a fast and reconfigurable way, and their detection," ...

"It is the first of its kind to image several quantum particles of light at once, enabling the observation of their spooky behaviour with ultra-sensitive cameras," said Associate Professor Sukhorukov, who led the research with a team of scientists at the Nonlinear Physics Centre of the ANU Research School of Physics and Engineering.


The unconventional lens, which is 100 times thinner than a human hair, could enable a fast and reliable transfer of quantum information from the new-age computers to a network, once these technologies are fully realised.

The device is made of a silicon film with millions of nano-structures forming a metasurface, which can control light with functionalities outperforming traditional systems.
No comments: 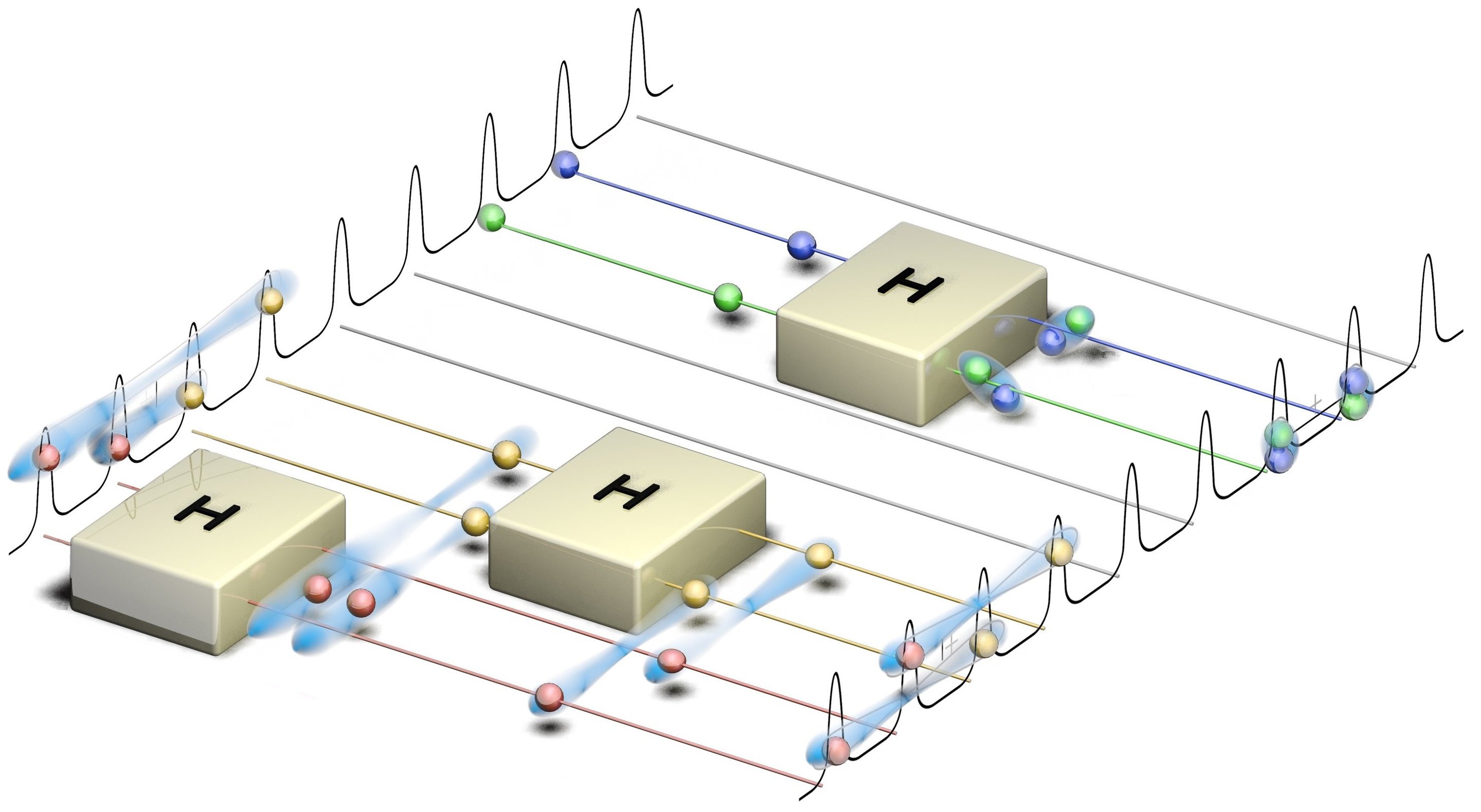 December 4, 2018 by Laurie Varma, US Department of Energy

... two entangled photons contained in a single strand of fiber-optic cable—is the "smallest quantum computer you can imagine. This paper marks the first demonstration of our frequency-based approach to universal quantum computing."
"A lot of researchers are talking about quantum information processing with photons, and even using frequency," said Lukens. "But no one had thought about sending multiple photons through the same fiber-optic strand, in the same space, and operating on them differently."
The team's quantum frequency processor allowed them to manipulate the frequency of photons to bring about superposition, a state that enables quantum operations and computing.
...
https://phys.org/news/2018-12-block-quantum.html
No comments:

1. Quantum computing aims to take advantage of unusual properties that matter exhibits once we begin to study it at a level of detail below atomic level – the sub-atomic, or quantum level.

2. While conventional computer use binary “bits” (one and zero) as the process for calculation, a quantum computer uses quantum bits, knows as qubits – which can exist in both states simultaneously, as well as many other states in between.

3. Qubits exhibit properties of quantum entanglement – a phenomenon that means pairs, or groups, of particles cannot be measured or described independently of each other – they are “entangled” and their state depends on that of other particles in the group.

4. Due to factors which are still not fully understood despite the best efforts of Einstein, Shrodinger and many others since, it appears that particles linked in this way can transfer information between each other, even though, theoretically, they could be an unlimited distance apart.

5. Computer scientists working on quantum computers believe that in the future it will be possible to harness these mechanisms and build computers which will be millions of times more efficient that anything available today.

Meanwhile, in the real-world …

6. The possibility of quantum computing was first proposed by physicist Richard Feynman in 1982.

7. In 1994, mathematician Peter Shaw demonstrated how quantum computing could be used to crack the common encryption standards available then – many of which are still in use today.

11. Organizations which are publicly known to be making use of D-Wave’s quantum computing infrastructure include Google, NASA and Lockheed Martin.

12. Satya Nadella, Microsoft CEO: “The world is running out of computing capacity. Moore’s law is kinda running out of steam … [we need quantum computing to] create all of these rich experiences we talk about, all of this artificial intelligence.”

14. David Deutsche, Physicist at the Centre for Quantum Computation, Oxford University: “Quantum computation will be the first technology that allows useful tasks to be performed in collaboration between parallel universes.”

15. Jeremy O’Brien, physicist and professorial research fellow at the University of Bristol: “In less than 10 years quantum computers will begin to outperform everyday computers, leading to breakthroughs in artificial intelligence, the discovery of new pharmaceuticals and beyond. The very fast computing power given by quantum computers has the potential to disrupt traditional businesses and challenge our cyber security.”

16. Geordie Rose, CTO at D-Wave: By 2028 intelligent machines will exist that can do anything humans can do. Quantum computers will have played a critical role in the creation of this new type of intelligence.

17. Quantum computing requires extremely cold temperatures, as sub-atomic particles must be as close as possible to a stationary state to be measured. The cores of D-Wave quantum computers operate at -460 degrees f, or -273 degrees c, which is 0.02 degrees away from absolute zero.

18. Quantum computing is often described as “natural”. This is because although we don’t completely understand them, the mechanisms underpinning the real world (which have evolved through nature) clearly operate at a sub-atomic level. By simulating this with computers, we come a huge step closer to being able to simulate the natural world.

19. At a quantum level, science fiction appears to become reality. Particles can travel backwards or forwards in time and teleport (quantum tunnelling) between two positions.

One possible explanation for why quantum computers work involves parallel universes. It has been theorized that qubits are able to exist in two states simultaneously because we are observing them in multiple universes simultaneously.


How should qubits be represented in a quantum programming language?

In the quantum circuit model, a quantum computation is represented as a sequence of operations, sometimes known as gates, applied to a set of qubits. This leads to pictures such as:

from Quantum Computation and Quantum Information by Nielsen and Chuang
In this picture, each horizontal line is a qubit, each box is an operation, and time flows from left to right.

When we want to design a programming language to express a quantum computation, the question naturally arises of whether qubits should be represented in the language, and if so, how. In the most naive model of such a picture, there would be a software entity that represented each horizontal line, with little or no accessible state other than perhaps a label, but there are other possibilities.

Quipper uses linear types to model quantum states, although it refers to the data type as Qubit. The intuition is that the no-cloning theoremprevents you from making a copy of the quantum state of a qubit, so it makes sense to use the type system to prevent you from making a copy of the software representation of quantum state. Linear types have proven useful in other contexts where copying the software representation of an entity would be bad, for instance in functional concurrent programming, so why not for quantum computing?
The argument for linear types is, as mentioned, that they reflect the no-cloning theorem in the language. The implication is that a software qubit represents a qubit state, rather than an actual object. The problem with this view is that, once entangled, it no longer makes sense to talk about the state of an individual qubit; that’s more or less exactly what being entangled means. To model this in software, an entangling gate such as a CNOT should take two single-qubit states as inputs and return a software entity that represents two-qubit state as output — as long as you never want to perform a CNOT on two qubits that are each entangled with other qubits.
The software entity as quantum state abstraction breaks down for two reasons:
Qubits as Opaque References
An alternate approach is to use an opaque data type that represents a reference to a specific two-state quantum system, whether physical or logical (error-corrected), on which operations such as `H` or `X` may be performed. This is an operational view of qubits: qubits are defined by what you can do to them. Both OpenQASM and Q# follow this model.

The representation used in Q# has the interesting implication that all of the actual quantum computing is done by side effect. There is no way to directly interact with the quantum state of the computer; it has no software representation at all. Instead, one performs operations on qubit entities that have the side effect of modifying the quantum state. Effectively, the quantum state of the computer is an opaque global variable that is inaccessible except through a small set of accessor primitives (measurements) — and even these accessors have side effects on the quantum state, and so are really “mutators with results” rather than true accessors.
In general programming, the use of side effects and global state is generally discouraged. For quantum computing, on the other hand, they seem to match the actual physical reality pretty well. For this reason, we decided that this abstraction was the right one to use in Q#.
This post is the first one in the Q# Advent Calendar 2018. Follow the calendar for other great posts!
Alan Geller, Software Architect, Quantum Software and Applications
@ageller